Longtime Shelburne resident Rosalyn Graham is this year’s recipient of the Colleen Haag Public Service award in recognition of her more than 40 years of community service.

The award was presented by Gail Albert and Susan Stock at a hybrid informational town meeting February 28th, 2022 in Shelburne Town Hall.

“Trained as a journalist, Graham in 1978 saw a need and filled it, using her journalistic curiosity, precision and ability to foster relationships to found the Shelburne News,” Albert said in her introduction. “She published and evolved it until 2003 when she passed it along to the string of successors who have sustained it as a herald of local news.”

“Roz has been quoted as saying, ‘There’s not a committee I do not like,’” Albert said, “So in 2005, she helped establish Shelburne Charlotte Hinesburg Interfaith Project’s resale shop to raise money to support other local non-profits — a mission that last year resulted in grants to 11 local groups.”

Every year, Shelburne celebrates and recognizes longtime town clerk Colleen Haag’s 35 years of professional service to the community. The award recognizes someone who exemplifies “the spirit of public service, who has shared his or her time, talent and energy for the betterment of Shelburne, who “I’m not sure if I feel energized or exhausted, but it is true that I never met a committee I didn’t like,” Graham quipped after being handed the award by Stock, last year’s recipient. “Just ask my family. When I think of who else has won this award, to even be on that list is an extremely high honor.”

“I just count myself remarkably lucky,” Graham said. “I am always thrilled and delighted with things that are coincidences and the coincidence that 46 years ago brought us to Shelburne, Vermont laid the pathway to all of the things that Gail mentioned and I don’t think there could have been a better place to have done all the fun, exciting, adventurous, productive, enjoyable things that I’ve had the opportunity to do, so thank you very, very much for this.”

Over the years, Graham has also lent her efforts to Wake Robin, Shelburne Historical Society, Champlain Housing Trust, and as an avid dog lover, she was a founding member and supporter of the Shelburne Dog Park. She’s a longtime member of Shelburne-Charlotte Rotary and was referred to by those who nominated her as a “relentless fundraiser,” who has used her energy to support so many local causes, Albert said.

If that wasn’t enough, “Graham took on leadership of the Shelburne Business and Professional Association and our wonderful farmers market when its founder, Tod Whitaker, retired, just as the pandemic hit creating a whole new set of challenges,” Albert added, noting that Graham also lends her voice on the town’s economic advisory committee.

One person who nominated Graham for the award said, “Let me talk about her spirit, kindness and motivation. Roz cares and always has ideas to make the world a better place. They can be big ideas, but she gets to the basic, feet-on-the-ground kind of approach to problem solving and improving life in a very local, practical way.”inspires purpose and who drives lasting solutions — someone who makes a difference.”

Article and Photo Courtesy of the Shelburne News 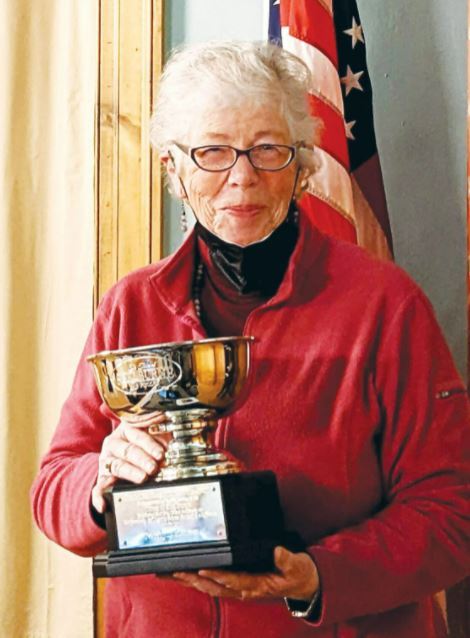